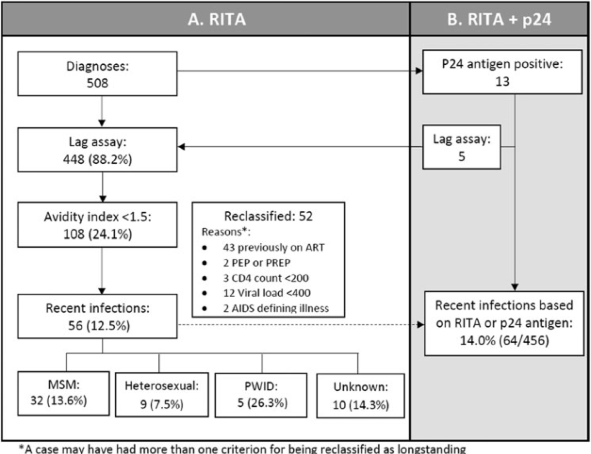 Between 2012 and 2016 Ireland experienced at 50% increase in the number of HIV diagnosis. In order to understand whether there was an upsurge in the epidemic or if the increase was a result of detecting previously undiagnosed cases they integrated recent infection testing into their diagnosis-based HIV surveillance system. The goal was to identify recent infections in order to better monitor the HIV epidemic and target prevention programs. They integrated Lag Avidity testing into their routine testing and used demographic, clinical and epidemiological information routinely collected through their Computerised Infectious Disease Reporting (CIDR) system to complete the recent infection testing algorithm. The National Virus Reference Laboratory (NVRL) tested sera from all new HIV cases with the Sedia HIV-1 limiting antigen-avidity EIA assay. They also tested for the p24 antigen which is an indicator of infection in the last 3 weeks.

They applied RITA to diagnoses notified between 1 January 2016 and 31 December 2016 with an avidity index (AI) result. Surveillance data were extracted from CIDR in August 2017, after the annual data validation process was completed. The RITA used classified cases with an AI of less than 1.5 as likely to be a recent infection unless epidemiological criteria (CD4 count <200 cells/mm3; viral load <400 copies/ml; the presence of AIDS-defining illness; prior antiretroviral therapy use; history of PrEP or PEP use in previous 6 months) indicated a potential false-recent result. They calculated a second estimate of the proportion of recent infections that included cases who were p24 antigen positive, but did not have avidity testing carried out. The denominator for this estimate included all HIV diagnoses notified in 2016 with an available AI result, or with a positive p24 antigen test.

RITA results were returned to clinicians with interpretation guidance (drafted in partnership with patient organizations). There were anecdotal reports that results are valuable at both individual and population level.

Of 508 diagnoses in 2016, they linked 448 (88.1%) to an avidity test result. RITA classified 12.5% of diagnoses as recent, with the highest proportion (26.3%) amongst people who inject drugs. In multivariable logistic regression, recent infection was more likely with a concurrent sexually transmitted infection (aOR 2.59; 95% CI 1.04–6.45). Data were incomplete for at least one RITA criterion in 48% of cases.

The study highlights the need to monitor trends in HIV testing patterns by sub-group as a critical step to interpreting recent infection testing data. They identified recent infections among persons previously diagnosed outside of Ireland; inclusion criteria of previous diagnosis <1 year should be considered.

The study demonstrated the feasibility of integrating RITA into routine surveillance and showed ongoing HIV transmission and a high proportion of recent infection among PWID. To improve the interpretation of RITA, further efforts are required to improve completeness of the required epidemiological data.