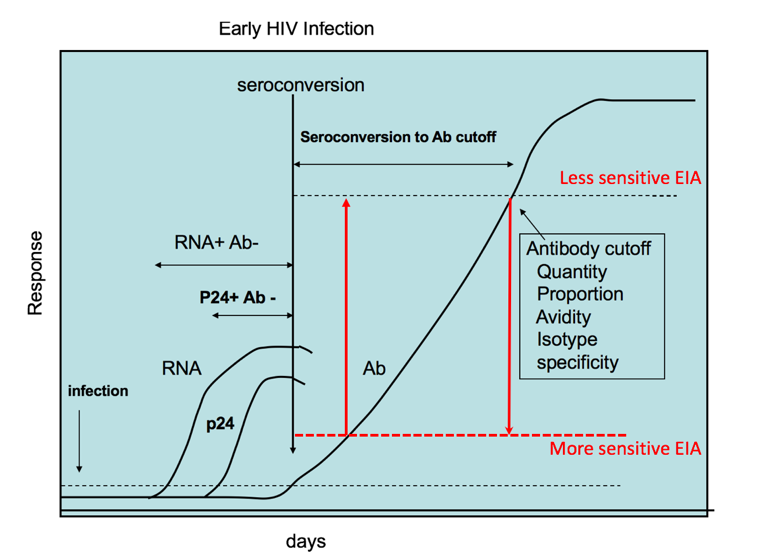 Soon after the first-generation HIV test was licensed in 1985, there was interest in understanding what went on in infection before measurable HIV antibody appeared. This was largely driven by blood banks’ need to be able to identify donors with HIV infection before they became antibody positive (approximately three weeks from exposure in the original tests). The advent of the ability to test for an HIV antigen, the p24 nucleocapsid protein, which is produced in excess by the replicating virus and enters the circulation, marked the beginning of our technical ability to detect recent HIV infection from laboratory tests. As shown in Figure 1, p24 appears in the circulation at approximately 14 days post-infection. If a patient tests positive for p24 antigen but not for HIV antibody, that person is likely between 14- and 21-days post-infection. This is a very narrow window, and large samples are required to find people in this window. Blood tests have continued to evolve, and blood banks now screen with third-generation tests, which detect antibody by around 21 days post-infection, and antigen testing. HIV RNA testing is another earlier marker of infection that appears even earlier than p24 antigen; it is, however, used primarily for testing newborns and infants for HIV infection (who can have transplacentally transfused maternal antibody).

Figure 1. HIV antibody, p24 and RNA levels as a function of time since exposure.

What properties should an ideal test for incident HIV infection have? It should be universally positive in recent infection and universally negative later in infection. It should be unaffected by HIV subtype, mode of transmission, antiretroviral therapy, presence of opportunistic infections and demographic factors such as age, sex, race and pregnancy. Finally, for the purposes of calculating incidence, it should have a relatively long and uniform window period. There are two broad categories of ways to calculate incidence: direct and indirect methods (Table 1). Below we examine one approach to direct measurement, estimation using laboratory tests for recent infection.

Antigen and nucleic acid testing in the window period. Early interest in acute HIV infection was two-fold. First, clinicians were interested in the diagnosis of acute HIV infection, a clinical syndrome that included symptoms such as fever, rash, myalgias and arthralgias [[1]]. The second was to use laboratory markers of acute infection to estimate HIV incidence in cross-sectional samples. In 1995, Brookmeyer and colleagues used p24 antigen testing (without regard to HIV antibody) to calculate HIV incidence in a sample of HIV-seronegative patients attending a sexually transmitted disease clinic in Pune, India [[2],[3]]. They found 15 of 1,241 patients to be antigen-positive, antibody-negative and, using a window period of 22.5 days, calculated an incidence rate of 19.6 per 100 person years in this sample. This general method, but using HIV RNA testing instead of p24 testing, was used by Pilcher and colleagues to estimate HIV incidence in North Carolina among individuals testing HIV-negative in state testing facilities [[4]]. They found 23 nucleic acid-positive specimens among 108,644 HIV-uninfected individuals and, combining these results with results from the sensitive/less-sensitive EIA, described below, calculated an HIV incidence of 2.2 infections per 1,000 per year. Similar techniques were proposed for estimating incidence among blood donors [[5]]. However, whether using p24 antigen testing or HIV RNA testing, these methods have not been subsequently used on large samples to estimate incidence largely due to the sample sizes required and the uncertainty as to what the sample represents [[6]].

Serological Testing Algorithm for Recent HIV Seroconversion. In 1998 a new method for identifying patients with recent infection appeared, the Serological Testing Algorithm for Recent HIV Seroconversion (STAHRS) [[7]]. This method tested serum twice, once with a relatively more poorly performing first-generation antibody test (the less-sensitive or detuned test) and the second with a state-of-the-art third generation test (the sensitive test). The less sensitive test was calibrated to detect HIV antibodies approximately 150 days after infection while the sensitive test could detect it within 21 days. Patients who were positive by the new test but negative by the older test were categorized as recently infected, that is, they were in a window period of 21 to 150 days post-infection (Figure 2).

Estimating incidence using STAHRS, however, turned out to be problematic because of variable window periods among different HIV-1 clades. The original window period of 129 days had been estimated using North American type B clades, and the poor performance with non-type B clades [[8]] and problems with false-positive results (that is, false recent results) among patients on antiretroviral therapy (ART) [[9]] led to its eventual discontinuation as a way to estimate incidence. Interestingly, though, the authors saw that the test might be used for something more than incidence estimates and wrote, “It is useful … at the clinical level for patient care … and at the public health level for focusing and evaluating HIV prevention efforts.”

Because of the clade-to-clade variability and other issues that limited the utility of STAHRS, attention turned to tests that would have similar performance across clades. The next series of assays assessed particular antibody characteristics – concentration [[10],[11]], proportion [[12]], isotype [[13]] or avidity [[14]]. All these characteristics appear between the earliest serological response and established infection, that is, the window period. Of these, two, the BED-capture EIA (or BED-CEIA) incidence assay and the avidity assay, have been widely used to estimate incidence in cross-sectional samples.

BED-CEIA. The BED-CEIA uses a quantitative IgG-capture EIA to determine the relative ratio of HIV-1-specific IgG to total IgG [12]. This ratio is generally lower in earlier infection and higher in longer-term infection. The attraction of the BED-CEIA was that a synthesized peptide, representing a conserved region in the B, E (now CRF-01AE) and D clades of HIV-1, allowed for detection of early HIV infection in several clades [[15]]. The problem, however, remained misclassification of results as recent infections, particularly among those with late-stage infection, low CD4 cell counts and low viral loads and among those on ART [[16],[17],[18],[19]]. Moreover, clade-to-clade differences persisted, with variable window periods for various clades [[20]]. Because of these ongoing limitations, testing algorithms were introduced that combined to compensate for misclassification of long-term infections, such as testing for low CD4 counts, low viral loads or the presence of antiretroviral drug residua or even combining incidence assays, the so-called Recent Infection Testing Algorithm (RITA) [[21]]. Despite these attempts at improved performance, however, the UNAIDS Reference Group on Estimates, Modelling and Projections compared results from BED-CEIA testing in several African countries and Thailand and found that BED-CEIA overestimated incidence derived from a variety of methods. As a result, the Group recommended that BED-CEIA not be used for routine surveillance applications [[22]]. However, investigators continued to work with BED-CEIA and the newer limiting avidity (LAg) assay and using RITAs to improve performance [[23],[24],[25]] largely by minimizing false recent results.

Limiting antigen avidity testing. LAg testing has avoided several of the pitfalls of BED-CEIA testing and is now the basis for the point-of-care recency tests now being widely used in PEPFAR-funded projects. Avidity assays are based on the strength of antibody-antigen binding and the observation that early antibodies bind less strongly (less avidly) to HIV antigens than antibodies produced by a more mature immune reaction [[26],[27]]. Beyond a certain cut-off point, the antibody response is considered more mature, and the infection is classified as long-term. Unless ART is begun during primary infection, there should be minimal false positives due to viral suppression, whether therapeutically with ART or naturally among elite suppressors [[28]]. Moreover, the maturing avidity pattern has been shown to be similar in patients with clade B and non-clade B infections [[29]]. However, there is some evidence that avidity declines in patients with opportunistic infections, which may lead to misclassification [[30]].

In a 2014 meeting in Barcelona, WHO’s Incidence Assay Working Group reviewed recent data directly comparing the LAg, BED-CEIA, less-sensitive/detuned Vitros, Vitros avidity and BioRad avidity tests, which found that LAg had the lowest false recency rate (Table 2) [[31]]. Moreover, they endorsed the use of RITAs to reduce false recency rates [[32]], which at the time of the meeting had been used successfully to validate incidence measurements from Kenya [[33]], South Africa [[34]] and Eswatini [[35]].

Since the 2014 statement, numerous investigators have employed LAg assays with various permutations of RITAs to estimate incidence from representative samples. For instance, Kim and Rehle used the LAg assay plus two different algorithms to estimate incidence in representative national samples from Kenya and South Africa [[36]]. One algorithm used the LAg assay plus viral load testing; the other used the LAg assay, viral load testing and serum testing for antiviral drugs. The investigators tested HIV-positive specimens qualitatively for the presence of antiretroviral drugs using high-performance liquid chromatography with tandem mass spectrometry. In Kenya drugs tested for were lamivudine (3TC), nevirapine (NVP), efavirenz (EFV) and lopinavir (LPV). In South Africa they were 3TC, NVP, EFV, LPV, zidovudine, atazanavir and darunavir, reflecting drugs recommended in the national guidelines. They found that 4 participants in Kenya and 18 in South Africa who had tested positive by the LAg assay and had high viral loads, also tested positive for antiretrovirals, which, when removed by the RITA, led to an almost 20% reduction in incidence estimates (Table 3).

Other countries, notably Botswana [[37]], South Africa [[38]] and several of the Population-Based HIV Impact Assessments (PHIA) [[39],[40]] have used LAg avidity-based RITAs to estimate incidence (Table 4). PHIA investigators estimated incidences ranging from 0.06 per 100 person years in Ethiopia [[41]] to 1.36 per 100 person years in Eswatini [[42]]. They generally used RITAs that included viral load, but they also were able to add testing for antiretroviral drugs and were able to compare results (Table 4) [[43],[44],[45]].

Rapid point-of-care LAg testing. Rapid point-of-care (RT-POC) LAg avidity tests are the newest wrinkle and are being deployed in a number of PEPFAR-supported countries. Two kits are commercially available from Sedia Biosciences (Asanté) [[51]] and Maxim Biomedical (Swift) [[52]]. The tests can be done with capillary blood and, as they are rapid tests, can be applied in routine HIV testing settings. Some preliminary data are available from Central America, Kenya and Malawi. In Central America, they are used to identify patients presenting to HIV testing sites in Guatemala, Nicaragua and Honduras. In Guatemala, 69% of patients testing positive by RT-POC identified sexual partners who were HIV-infected compared to 39% of those with long-term HIV infection while in Nicaragua the yield increased from 55% to 75% [[53]]. In Malawi, RT-POC LAg avidity tests were used to characterize recent infection among 15-to-24-year-old women [[54]]. Of 589 women who were newly diagnosed with HIV infection, 68 (11.7%) had recent infection, which translated to an estimated incidence of 0.59 per 100 person years. Older women and those residing in Blantyre had significantly higher incidence rates. Another report from Grebe and colleagues [[55]] found that in a pooled seroconverter group using Sedia® LAg-avidity assay and RITAs the mean duration of recent infection (MDRI) was approximately 40 days longer in women than in men; there was no difference between pregnant and non-pregnant women. Other field trials have recently been completed, and more data will be presented at the International AIDS Society’s Conference on HIV Science in Mexico City in July 2019.

[22].   UNAIDS Reference Group on Estimates, Modelling and Projections. Statement on the use of the BED-assay for the estimation of HIV-1 incidence for surveillance or epidemic monitoring. Available at: http://data.unaids.org/pub/epislides/2006/statement_bed_ policy_13dec05_en.pdf.Accessed 31 March 2019.