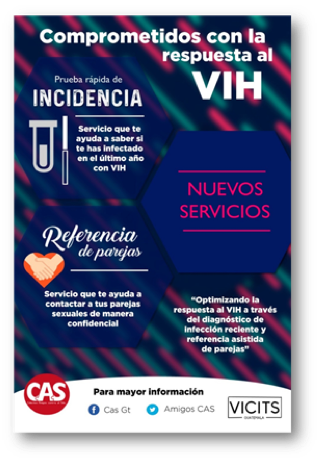 Central American countries were among the first in the world to implement HIV rapid recency testing and recognize its potential for improved surveillance and public health response.  While HIV testing and counseling (HTC) is offered to all contacts of people recently diagnosed with HIV, recency assays allow healthcare workers to identify and prioritize for testing the sexual partners of HIV-diagnosed patients who were infected in the past 12 months, when the likelihood of transmission is high. PEPFAR, CDC, and implementing partner Universidad del Valle de Guatemala (UVG) organized a regional workshop in October 2017 to introduce recency testing to stakeholders whose understanding and adoption of this new strategy was needed for successful regional implementation, including National AIDS Programs, clinicians, laboratorians, and community-based organizations (CBOs).  In light of Central America’s concentrated epidemic, engaging with the men who have sex with men (MSM) community was of crucial importance.  We approached this component of our recency testing introduction strategy using a two-pronged framework: 1) community consultations before implementation, and 2) client surveys during early implementation.

During the first phase of planning and stakeholder engagement, we recruited champions from MSM CBOs who understood the public health benefits of recency testing in their communities and could facilitate the process of implementation. CDC and UVG convened meetings with MSM CBOs to introduce recency testing as an additional and innovative component of the tailored HIV combination prevention package available for key populations. During these consultations, CDC and UVG provided background information and explained the significance of recency testing. Community partners raised their concerns, especially regarding confidentiality.  The team shared the process for recency testing, consent, and results delivery; the opportunity for prioritized index testing (i.e., the testing of exposed contacts) among people with recent infection; and procedures for HIV rapid recency data collection, analysis, and expected actions.

These initial meetings led to increased interest from CBOs in recency testing, the establishment of partnerships for recency testing service promotion and data use, and the development of joint recency testing/index testing promotional materials and FAQs.  In Guatemala, leading MSM CBO Colectivo Amigos contra el Sida (CAS) led an initiative to develop a demand creation strategy for recency testing across its social media outlets (see Figure 1).   In El Salvador, PEPFAR/CDC and the National AIDS Program organized a follow-up half-day workshop with MSM organizations to address community concerns about the legal framework around recency testing and index testing, including confidentiality, and potential intimate partner violence.  PEPFAR and MoH representatives addressed these concerns by sharing client-centered guidance from the recency standard operating procedures, confidentiality measures taken at the site level, and highlighting that a local ethics committee reviewed and cleared the national recency protocol. As an outcome of this workshop, MSM CBOs embraced recency testing and became enthusiastic advocates for its use in El Salvador.

Having established an ongoing collaboration between Ministries of Health, PEPFAR/CDC, and MSM CBOs enabled productive and efficient community consultations regarding this new initiative.  It would have been much more difficult to build trust between the CBOs and the MoH if rapid recency testing was the first attempt of partnership.  It was also helpful for CDC and UVG to clearly link rapid recency testing to programmatic action that could improve health outcomes in the MSM community, i.e., prioritization of partners of people with recent infection for index testing.

Secondly, the team conducted surveys among health care workers and MSM community members to gain insights on acceptability and preferences related to recency testing, index testing, and assisted partner notification.  A total of 393 MSM seeking HIV testing completed the survey at facilities serving key populations in Guatemala, Honduras, and Nicaragua.  Over 90% of them agreed that, in case of a positive HIV diagnosis, it would be important for them to know if their infection was recent and to refer their sexual partners for testing.  Key motivators for recency testing and index testing acceptance were the perception of rigorous service confidentiality, the opportunity to provide early HIV treatment for their partners, and to prevent new HIV infections in the MSM community.  A participant shared, “rapid recency testing enhances the service package at the clinic and its results help improve awareness of prevention options for me and my partners.” Clinicians and laboratory workers stated that recency did not significantly increase their workload.  They also overwhelmingly supported the return of recency results to users.

Many participants also expressed they would accept recency testing in order to identify which sexual partner transmitted the infection to them.  This finding was critical as it allowed the team to update recency counseling scripts to clarify that recency results, by themselves, do not indicate direction of HIV transmission.  Users expressed that they would not accept recency if they felt that their results would not be shared in a confidential manner.

With these significant milestones and successes, next steps for HIV rapid recency testing in Central America include:

Community engagement, and the ownership and sustainability it brings along, will be a critical component in successfully achieving each of these steps.