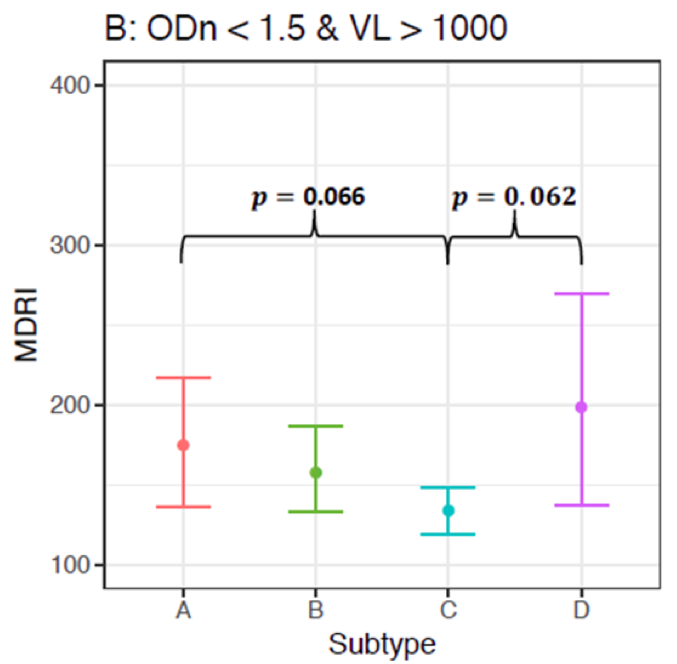 We estimated MDRI and FRR for a range of RITAs consisting of LAg ODn thresholds, alone, and in combination with viral load. To estimate MDRI, we harmonised time-since-infection estimates for all subjects based on diagnostic testing histories. We fitted regression models for the probability of exhibiting the recent biomarker as a function of time since infection, for each threshold combination and separately for each HIV-1 subtype, and integrated the function from zero to the time cut-off T (2 years) to obtain MDRI. To evaluate surveillance performance, we defined epidemiological scenarios (subtype distribution, incidence, prevalence, treatment coverage) based on (I) the South African, (II) the Kenyan, and (III) a concentrated MSM epidemic. We estimated context-adapted MDRI (weighted average of subtype-specific MDRIs, adjusted for screening test) and context-specific FRR (weighted according to density of the times-since-infection and treatment coverage in the population). Uncertainty in epidemiological parameters was incorporated. Performance was defined as precision of incidence estimates.

The HIV-1 Limiting Antigen Avidity EIA (LAg assay) used for detecting ‘recent’ HIV infection is mainly from two manufacturers: Maxim Biomedical and Sedia Biosciences. We assessed and compared the performance, for incidence estimation, of the Maxim and Sedia LAg assays.

We ran both assays on a panel of 2,500 well-characterised HIV-1-infected specimens, most with estimable duration of HIV infection. We analysed concordance of assay results, assessed reproducibility using repeat testing, and estimated the critical performance characteristics of a test for recent infection – mean duration of recent infection (MDRI) and false-recent rate (FRR) – for a range of normalised optical density (ODn) recency discrimination thresholds, in combination with viral load thresholds. We further specified three surveillance scenarios defined by incidence, prevalence, treatment coverage, and subtype and infection-time distributions based on A) South African B) Kenyan, and C) concentrated MSM epidemics. Overall performance was measured as precision of incidence estimates.

Maxim LAg ODn values can be approximately inferred from Sedia values with a conversion factor of 1.172, arising from differences in the reactivity of calibrators supplied in the assay kits. Performance for surveillance purposes was indistinguishable, although different thresholds were nominally optimal, and, crucially, different values of MDRI and FRR must be used in survey planning and incidence estimation.

Routine assessment of transmission dynamics facilitates the universal test-and-treat approach for persons living with HIV (PLHIV) and ensures that interventions target those with highest risk. Rapid recency tests can distinguish recent (on average, in the past 6 months) from non-recent infection, enabling healthcare workers to detect, monitor, and respond to recent infections. We describe the first use of point-of-care recency tests as a surveillance tool in Nicaragua.

From January to July 2018, all persons diagnosed with HIV per the national HIV testing algorithm at 205 public testing sites had blood samples sent to the National Center for Diagnostic and Reference (CNDR) for confirmation. The rapid recency assay for HIV-1 (SEDIA Biosciences) was performed onsite for PLHIV diagnosed at key population clinics and at the CNDR for all other samples. Viral load testing was performed using COBAS Amplicor/Ampliprep HIV 2.0 (Roche Diagnostics) on all samples testing recent to confirm recency of infection (≥1,000 cps/mL). Surveillance variables (age, sex, sexual orientation, and place of residence) were recorded in a database. We conducted univariate analysis to describe characteristics of PLHIV with recent infection (Stata 13.0) and identified areas with statistically significant recent HIV infection (p values <0.05) by comparing observed versus expected number of recently infected individuals (SatScan).

Of the 452 PLHIV with a new diagnosis and recency test performed during the assessment period, 84 (19%) tested recent; of these, 58 (69%) had a viral load ≥1,000 copies/mL. The median age (33 years; range, 14–64 years) among PLHIV with recent infections was significantly lower than the median age  (49 years; range, 14–73) among PLHIV with long-term infections (p=0.03). Of those with a confirmed recent infection, 83% were men, 31% were men who have sex with men, and 59% lived in Managua. Of 17 clusters identified, 2 had high rates of HIV recency with 2.9–6.1 times more recent infections than expected, with Managua having the highest relative risk.

Most male and Managua PLHIV residents tested recent. A visual dashboard and maps identifying potential clusters of recent transmission were developed and are updated weekly to facilitate real-time analysis and response.